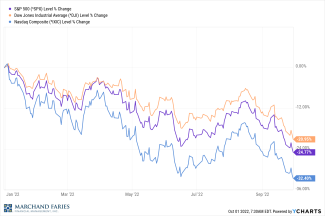 Despite the improvement in the US consumers’ balance sheets during the pandemic, they are now facing several headwinds. First, spending power is eroded by inflation running at a 40-year high. The Federal Reserve’s adjective on inflation has now changed from “transitory” to “entrenched” as impact of global influences including access to fertilizer to grow crops have yet to be realized. Second, higher interest rates are pushing up the cost of debt leaving less cash for discretionary spending and hampering small business startups. Third, overall wealth has been eroding, initially with stock and bond market declines, but we soon expect home prices to fall in the coming quarters affecting total wealth. Again, those most affected are lower income families, those on a fixed income, charities and those who have little to no savings. Inflation always has been and will continue to be a tax on the poor.

And now for some good news; US companies continue to believe in capitalism. New issue fixed income investments will start to pay better than in past years where money markets have paid virtually nothing in the most recent past. Quality and sustainability of investments are still significant and play a part in continued long-term growth.

As we finish out the summer, volatility will continue to be the mantra. We do not expect talk on tax increases until after the November midterms, when the reality of paying off debt and expansion programs becomes more relevant to lawmakers.