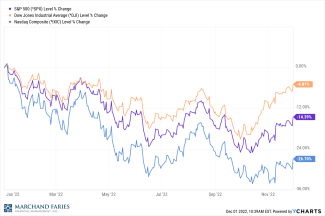 Jennifer Sheffler | Dec 1, 2022
Although the markets may not finish in the black for 2022, November saw a vast improvement over the previous months and corporate earnings and outlooks have remained resilient. The 10-year Treasury yield is up to approximately 3.7% from 1.5% at the beginning of the year showing the extent of the dramatic rise in interest rates.
The Federal Reserve has a final meeting for the year on December 13-14, and we expect another rate increase of between .50 and .75%. Some have argued that the Fed will be forced to back off its increases sooner than expected, but for now the focus is on raising unemployment and slowing the economy. Is a recession in the cards? Many believe it is already here. The severity of a recession remains the primary question, although strong consumer balance sheets should help cushion the impact. It is worth mentioning that typically in recessions stocks bottom out well before GDP (Gross Domestic Product) declines.
Recently announced technology layoffs and the end to seasonal employment may prompt rapidly increasing interest rates to slow. Supply chain issues from goods and materials sourced in locked down China may contribute to putting the brakes on the US economy. The one thing the economy does not need is a rail strike, which could happen as early as December 5th and threaten the nation’s coal shipments, its supply of drinking water, and shut down passenger rail. The impact on the U.S. economy could be as much as $2 billion a day should railroad workers strike.
Year to date the Dow, S&P 500 and NASDAQ are negative at -4.81%, -14.39%, and -26.70% respectively, with the 10-year Treasury yielding 3.68%.
As always, we appreciate the opportunity to serve you and your family and wish you all a Happy Holiday Season and a safe, healthy, and prosperous New Year.