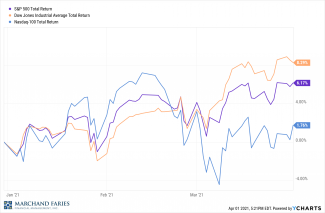 Despite the fluctuations during the month, all three indices managed to end the month on the positive side.  The economies of various states are slowly opening and once the various stimulus payments start to enter the economy through consumer spending, activity should accelerate.

The latest focus of the Federal Reserve has been employment and inflation, which for now seem to be in check apart from the price of diesel and gas.  If the Federal Reserve keeps rates muted, we should see positive activity in the equities markets.  Bond pricing lost significant ground in March as treasury yields climbed.  The 10-year Treasury yield closed the month at 1.746, an increase of almost 20% from February.  Although home prices continue to grow at an accelerated rate due to lack of supply, the 30-year mortgage rate climbed over 3% in March having significant impact on refinances and the mortgage industry.

The economy grew at an annualized rate of 4.3%, just 0.2 percentage point ahead of the second estimate but well below the stimulus-injected, third-quarter estimate of 33.4%.  Inflation, as measured by the personal consumption expenditures price index, rose 0.2% in February, and only 0.1% excluding foods and energy. In what may soften fears of mounting inflationary pressures, consumer prices rose 1.6% over the 12 months ended in February, an increase of only 0.2 percentage point over the 12-month increase ended in January. Consumers earned less and spent less in February compared to January. Personal income fell 7.1% last month, while disposable (after-tax) personal income plunged 8.0%. Personal consumption expenditures, a measure of consumer spending, decreased 1.0% in February after increasing 3.4% in January.

Nearly 380,000 new jobs were added in February, however the unemployment rate remains at a lofty 6.2%. With unemployment claims remaining relatively high, the March employment report is not expected to greatly surpass the prior month's figures.